How will the next San Diego County Supervisor tackle air quality, housing and health?

The San Diego County Board of Supervisors controls a $6 billion budget and makes critical decisions about health, housing, air quality, and toxic pollution in our communities. In 2020, residents of Barrio Logan, Logan Heights, Sherman Heights, National City and the rest of San Diego County District 1 will be electing a new supervisor for the first time in almost a quarter of a century.

On May 31, 2019, EHC partnered with ACCE, Engage San Diego and the Invest in San Diego Families Coalition to host a public forum and hear from the declared supervisor candidates on how they would address critical issues facing communities in District 1.

The following declared candidates were in attendance at the forum:

Ben Hueso, the only other declared candidate on May 31, was unable to attend the forum due to his current commitments as State Senator, which required him to be in Sacramento. He sent a short video clip in which he outlined some of the key elements of his campaign.

Based on the over 150 residents packing the Martin Luther King Jr. Community Center in National City last Wednesday, it’s clear EHC members and residents of District 1 want their voices heard in holding this office accountable. A group of community members had the opportunity to ask the attending candidates to respond to the following questions:

AIR POLLUTION: Philomena Marino
District 1 contains the region’s hot spots for diesel and particulate pollution. It includes the world’s busiest border crossing, the Otay truck crossing, the 905 and 5 freight corridors, the Port cargo terminals, heavy industry at the waterfront, and smaller industries. It includes the communities that rank highest in the region on CalEnviroScreeen, the state’s tool for identification of the most impacted communities.

Q. What will you do to improve air quality for the residents and workers in District 1?

COUNTY BUDGET AND RESERVE: Tammy Jackson
The County of San Diego controls a budget of over $6 Billion, and they have budget reserves of over 50% of their annual revenue, which is almost $2 billion dollars.

Q. If elected would you spend the reserves and if so, how would you prioritize those expenditures?

Q. What will you do to reduce the environmental, economic, and social justice factors that contribute to this disparity in health outcomes?

HOUSING: Barbara Pinto
The most recent homeless count in the county is over 8100 individuals.

Q. With the housing crisis getting worse, what are some of your policy ideas to protect and preserve existing housing, and to produce new housing?

Q. What specific changes would you make to the County’s Climate Action Plan to significantly reduce greenhouse gas emissions? Within your answer please say what role should the County have in advancing mass public transit?

The county has underinvested in staff in key areas such as social workers, behavioral health, eligibility workers, public health nurses and many others.

Q. What you would do to assure proper services are provided in these areas and other county departments?

Finally, the candidates were asked a series of rapid-fire questions with the options to choose yes, no, or give a 15-second explanation.

(Click image above to view the questions in a PDF document)

Photos and videos from the Candidate Forum: 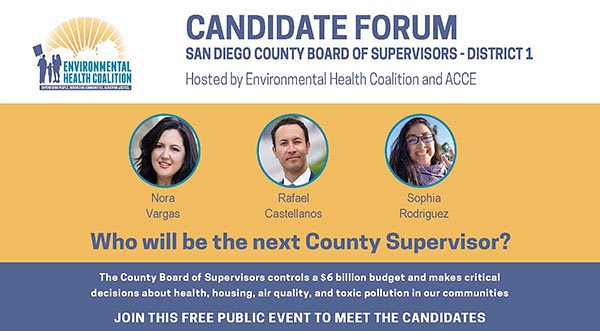